The interactive White-Elephant Gift Generator holiday card, utilizes the company’s marketing automation platform. A White-Elephant Gift Exchange is a relatively well-known game played by families and friends during the holidays. It was originally named after gifts, such as white elephants and other unusual animals, given by the king of Siam. These gifts were considered rather flagrant and would ruin the recipients because of the great maintenance expense or degree of difficulty to dispose of them. 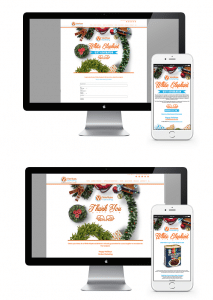 The initial email was sent to a list of recipients. Who would then click on a button to generate a gift idea for their special someone. This would direct them to a website landing page. They would complete a short form, filling in the gift recipient’s name, age, gender and interests. Once submitted, a second email would be delivered with an image and description of the lucky receiver’s gift idea, such as Unicorn Meat or a yodeling pickle, along with a link to purchase the gift online.

“This was a fun holiday greeting,” says Holly Jo Anderson, CEO of Veritas Marketing. “Several clients and business partners generated gift ideas for as many as nine loved ones or friends. It is unknown if any of them purchased the gifts.”

Over the past 23 years, the Summit International Awards (SIA) organization has established itself as one of the premier arbiters of creative excellence. The Summit Creative Award competition offers participants a unique opportunity to showcase their talents alongside similarly positioned agencies, and to have their work judged by experts in the advertising field.